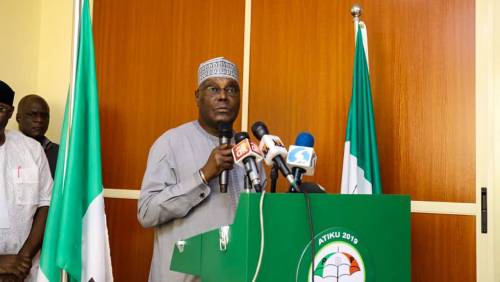 Africa News24 earlier reported that the Debt Management Office (DMO) on Wednesday disclosed that the Public Debt Data comprising the domestic and external debts of the Federal Government, States government and FCT stands at ₦24.947 Trillion.

“Increases were recorded in the Domestic Debt Stock of the FGN, States and the FCT. External Debt also increased by ₦101.646 Billion during the same period.

Reacting in a statement by his Media Adviser, Paul Ibe, Atiku noted that Nigeria’s debt profile is now at the stage where all genuine lovers of Nigeria ought to raise an alarm.

The statement reads: “On May 29, 2015, our national debt profile was at a very healthy ₦12 trillion. However, after four years of profligate spending, and even more irresponsible borrowing, our national debt doubled to ₦24.3 trillion by December 2018.

“As alarming as this is, what is more, troubling is that between December 2018 and March 2019, the administration of General Buhari added an additional and unprecedented ₦560 billion debt to our national debt profile.

“What could this junta have needed that amount for? If you take those dates into account, they fall on the period of electioneering, when monies were freely distributed by officials of this government in the name of Tradermoni and other election gimmicks that were discontinued after the election.

“We find it inconceivable that Nigeria could have had such unprecedented borrowings in the midst of almost unimaginable sorrowing, which resulted in our nation becoming the world headquarters for extreme poverty and the global capital of out of school children, even as we slipped in the Corruption Perception Index of Transparency International.

“As someone who headed the National Economic Council that paid off Nigeria’s entire debt under the visionary leadership of President Olusegun Obasanjo, Atiku Abubakar has the moral authority to call those who are turning Nigeria into a beggar nation to halt the drift into unsustainable borrowing.

“We cannot continue to borrow to pay salaries and support luxuries. Already, over 50% of our revenue is going towards debt servicing, not even debt repayments.

“We raise this alarm as responsible citizens and call on other lovers of Nigeria to speak up as we have no other nation to call our home, but Nigeria.”

Cultists Spend Money On Blood, I Spend Mine On Automobiles — Dino Melaye

Only 36 Women Have Been Senators In Nigeria — Report

If You’re Dating A Married Man And Not Collecting His Money, Your Head Needs To Be Examined — Mercy Aigbe

How Amotekun Will Operate

Gunmen Kill Family Of 16 In Kaduna