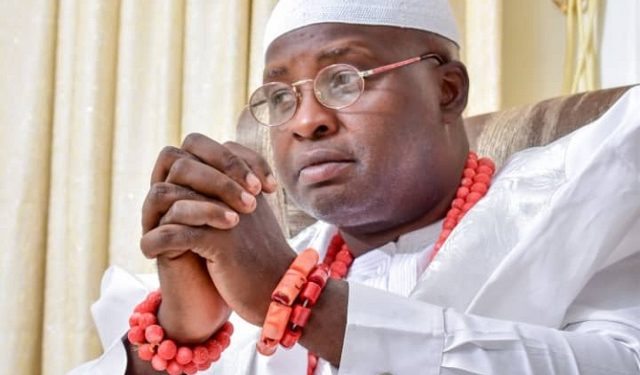 Governor Fayemi presented the staff of office to Oba Adeagbo despite the controversy around the installation of the king by royal families in the town.

A section of the ancient town had kicked against the appointment of Oba Adeagbo by the state government following his nomination by the town’s kingmakers.

The Head of Obajue Ruling House, Chief Adeleke Atolagbe, said the appointment of the monarch negated the age-long custom, tradition and rotational principle of the community.

Atolagbe argued that the government flouted the extant traditional law of the communiy by selecting Adeagbo who hails from Iyaaba ruling house contrary to the rotational policy that favours Obajeu ruling house.

Fayemi while presenting the instrument of appointment to the new monarch at governor’s office, Ado-Ekiti, Fayemi said the selection process that produced the new traditional ruler was devoid of political colouration or manipulation and was in line with extant Chieftaincy Law of the state.

The governor, represented the Deputy Governor Otunba Bisi Egbeyemi, urged Oba Adeagbo to extend his hand of fellowship to princes who contested the throne with him to foster peace and development of the town.

He urged Oba Adeagbo to see himself as a chief servant of his people and a force to reckon with in the development agenda of Otun Ekiti, Moba land and Ekiti State as a whole.

A statement by the Special Assistant (Media) to the Deputy Governor, Odunayo Ogunmola, said very limited number of people were allowed into the venue of the ceremony while the rule of physical distancing was observed in line with COVID-19 protocol.

“The precaution was taken in respect of COVID-19 directive which bars public ceremonies and to avoid crowding to prevent the spread of the pandemic but Oba Adeagbo promised an elaborate ceremony as soon as it is safe to do so,” he said.

Describing Oba Adeagbo as “the face of his people,” the Governor further charged him to use his good office in fostering good relationship with his subjects calling on all Otun indigenes at home and in Diaspora to rally themselves for community development.

In his remarks, Oba Adeagbo said providence made his emergence possible at a period COVID-19 pandemic was raging which necessitated a solemn and subdued ceremony away from his kingdom in a bid to avoid large a gathering.

The Oore said the state government’s decision to go ahead with the ceremony despite the public health challenges demonstrated Fayemi’s commitment not to leave the town rudderless for too long following Oba Popoola’s demise.

Oba Adeagbo said “with the Otun kingship race coming to an end, there are no losers rather, I assure my brothers that we are winning together.”

BREAKING: Nigeria Will Not Participate In 2020 WASSCE – FG