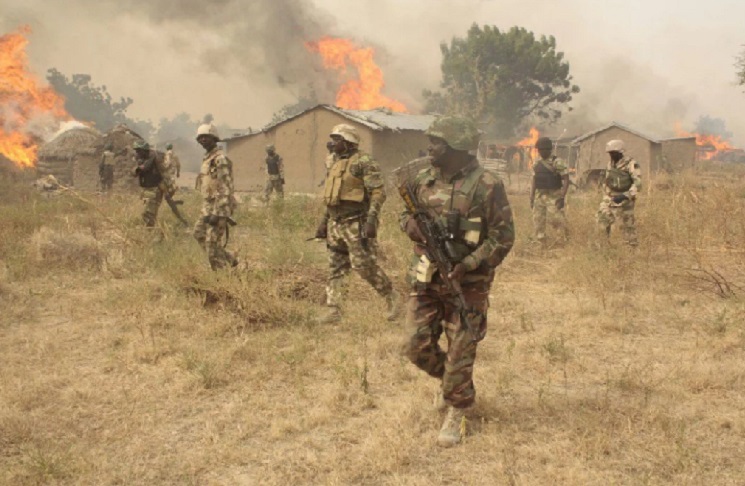 Nigerian troops are presently locked in fierce combat with ISWAP/Boko Haram terrorists in Dikwa, a Local Government in Borno State.

The terrorists had stormed Dikwa town on Monday in several gun trucks.

The intention of the terrorist, according to a military intelligence officer, was to take over the entire local government and reclaim Dikwa as one of their caliphates.

Though they succeeded in razing a United Nations building and part of the Dikwa Emir’s palace, troops from 82 Battalion and other army formations in the state have been mobilised and deployed to engage the insurgents.

“As I speak with you, there is still heavy gunfire going on between our military troops and the terrorists. Though the battle has lasted for over 15 hours, I cannot give you the exact number of casualties recorded on both sides,” the source told PRNigeria.

PRNigeria recently reported activities of informants, in some communities, not only leaking vital information to the terrorists, but harbouring them in their houses and settlements, while also assisting them (the terrorists) plant landmines against Nigerian troops.

Security sources had said the nefarious activities of informants, which are rife in some local governments, are sabotaging military operations in some parts of Borno, Yobe and Adamawa States.

One of the sources noted that the sabotaging activities of informants are so rampant in some axis and communities around Guzamala, Abadam, Marte, Kaga, Dikwa, Kukawa, Mobbar, Monguno and Gwoza Local Government Areas of Borno State.