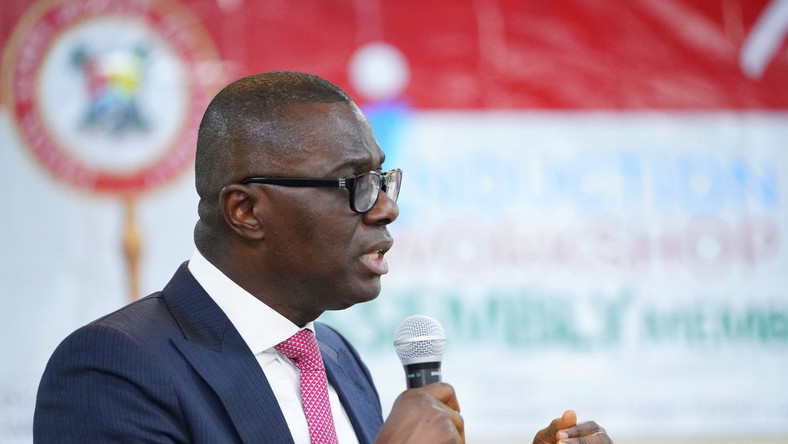 Lagos State Governor, Mr. Babajide Sanwo-Olu, has called on members of the Joint Tax Board, the apex body for all tax authorities in Nigeria, to expand its focus beyond Personal Income Tax to other tax areas.

Speaking at the opening ceremony of the 149th meeting of the Joint Tax Board (JTB), held at Eko Hotels and Suites, Victoria Island, Sanwo-Olu said members of the JTB should look towards harmonising the interpretations of the various tax laws to achieve true federalism.

Governor Sanwo-Olu, who was represented by Lagos State Commissioner for Finance, Dr. Rabiu Olowo, also stressed the need for the yearly enactment of the Finance Act to align it with current economic realities.

The Governor said the critical role that members of JTB play individually and collectively in the fulfillment of the social contract that underpins democratic governance is as important as the existence of the country itself.

He said: “I implore the Joint Tax Board (JTB) to expand its focus beyond Personal Income Tax, to other tax types. While I acknowledge that some of the extant legal or constitutional provisions are not within the purview of the JTB to review or amend, let me say that it is very crucial that your (JTB) unwavering voice is heard in championing the process for change.

“You are one of the most important stakeholders on this journey towards a truly fair, equitable and efficient national revenue collection system.

“As part of this retreat, therefore, I urge you to deliberate and come up with practical solutions on critical revenue issues and fiscal federalism, especially as they relate to Stamp Duties, the regulation of lotteries, Federal/State tax jurisdiction, and the matter of Value Added Tax, which I am aware, is currently subjudice.

“One step in the right direction for the Country, which must be highlighted, is the yearly enactment of the Finance Act. It is aimed at reviewing and updating all existing financial/fiscal legislations of the Federal Government and aligning them with current economic realities and global best practices.

“It is my hope and expectation that the Finance Act has come to stay and that it will progressively make a considerable positive impact on the state of our national and sub-national finances, and the fiscal relations between the various tiers of government.”

Governor Sanwo-Olu also disclosed that Lagos Inland Revenue Service (LIRS) since 1999 has undergone the most extensive tax administration reforms of any sub-national government in Nigeria, noting that “Lagos State has grown its Internal General Revenue (IGR) from N600 million monthly in 1999 to over N45 billion monthly as of today, an astounding increase of 7,400 percent.”

He said: “Lagos is by far the largest contributor to national non-oil revenues, by way of corporate income taxes, VAT (almost half of the vatable transactions take place in Lagos State), customs duties, port charges, and so on. This is to be expected from three of the sub-national entity that is the most populous in the country and is also the biggest commercial hub.

“However, in the subsequent re-distribution of resources, we do not see any reflection of the contribution of Lagos State. Our share in this redistribution fails to take into account the demographic and infrastructural burdens and pressures that accompany being the economic nerve center of the nation.

“This state of affairs is what compelled the State, under the visionary leadership of Asiwaju Bola Ahmed Tinubu, to commence a transformational reform of its internal revenue process, within the ambit of the law.”

In his remarks, the Chairman of the JTB, Mr. Muhammed Nami Mamman, who was represented by the Coordinating Director of the Federal Inland Revenue Service, Mr. Mohammed Abubakar, said the theme of the meeting, “Leveraging Technology for Effective Administration of Stamp Duties and Road Taxes in Nigeria” was carefully chosen to explore innovative ways of administering the two critical tax types in the Country.

Speaking earlier, the Chairman of the Lagos State Internal Revenue Service (LIRS), Mr. Ayodele Subair, in his welcome address, harped on the need for the board to continue to carry out its duties effectively for the overall development of the country as taxation remains the main source of revenue for the government.

“A lot more financial resources are required to enable us to procure and maintain the long-overdue uninterrupted power and water supply, better and quality education, improved security of life and property, better roads and drainage networks and other basic amenities the citizens yearn for,” he said.